I walked into the house and saw him. His hair was standing on end as if he’d been hit by a bolt of lightning. The chaotic electricity in his body had been causing tremors day and night for more than five years, but he’d noticed the chalk quivering in his hand at the board some 30 years earlier. My trip from the West Coast had begun much earlier that day. Now a car was waiting at the airport with the driver holding a sign with my name on it. I felt like a rock star. It was 10 pm when I finally arrived at the house. He was awake and had been anxiously awaiting to start treatment. I had spent all of five hours on the plane researching Parkinson’s disease. I saw the hope in his family’s eyes and knew I was in over my head. My rock star ego was deflated as I fell into the deep end of a family’s despair. That very, very long weekend compelled me to research the myriad of pathways for nerves in the body. It would be the start of more than 10 years of exploring how nerves work, and how they break down. Nerves are like imperfect power lines, delivering messages to muscles to create movement – telling eyes to cry when we are sad, pulling a hand away from a hot stove, raising the hair on the back of the neck to appear larger when we feel threatened by an external force. The power lines throughout the nervous system have defined functions, and by understanding those functions, the perspective on how the nervous system works can give important insight into how it can fail to perform efficiently or accurately. Merely naming nervous conditions or syndromes, a compilation of symptoms billable by insurance, is not enough. For example, “neuropathy” is a common diagnosis for feet. It means numbness or pain caused by a nerve. Okay. Now what? Following the pathways of nerves from the feet, back and forth to the spine, can help determine which power line might be damaged. A history of injury, repetitive stress, or stress itself can reroute resources along a nerve line to unintended locations, creating trigger points, pain, numbness, and a host of other chronic issues in the physical body. Finding and releasing restrictions in the nervous system can allow freedom of movement and reduce chronic pain. As a medical massage therapist, the relationship between muscles and nerves, specifically motor neurons, has played a large part in distinguishing function versus dysfunction of the nervous system.

The most commonly understood component of the anatomy and function of the nervous system is the motor neuron. In very simple terms, motor nerves compel muscles to contract so that the body can move. Motor neurons originate in the brain and travel like bundles of cables through the spinal column. The brain and spinal column are considered the central nervous system, or CNS. Once the motor neurons leave the spinal column, they enter the peripheral nervous system, PNS, which is essentially anything that isn’t the CNS, and are no longer considered one of the cool kids. Each bundle of motor neuron cables traveling from the brain has a predetermined purpose for movement. For example, one purpose of the sciatic nerve is to move the back of the hip and leg. If the brain wants the gluteus minimus, medius, and TFL, or tensor fasciae latae, muscles to move the leg outward into abduction as part of the gait for walking or running, the superior gluteal line of the sciatic nerve is activated. If the action of leg abduction is compromised, the problem could be stemming from the nerve line. Like a string of lights, if there is an issue anywhere along a nerve line, all the muscles, as well as the functions associated with that nerve line, may fail. Because the sciatic nerve impacts the muscles in the back of the body, it’s often depicted exiting the back of the hip bone. Actually, the sciatic nerve leaves the lower lumbar spine and upper sacrum and first travels to the front of the hip and then exits out the back, a leftover feature of a quadruped awkwardly adapting to life as a human with two weight-bearing legs. A sciatic nerve line can be impinged either at the spine, on the way to the front of the hip, under the piriformis muscle where the nerves exit out the back of the hip bone, or anywhere along the line of the muscle group that it’s trying to contract. Specifically, the superior gluteal nerve exits the back of the hip bone above the piriformis muscle, and the rest of the sciatic nerve lines are inferior, or below, the piriformis muscle. The TFL, a muscle that sounds like a coffee drink, is the upper, front portion of the IT band that travels down the outside of the thigh. Chronic IT band syndrome? Check the TFL nerve line – the superior gluteal nerve. Understanding motor neuron function in the PNS can be invaluable to problem-solving in chronic pain treatment.

Sensory Neurons That Are Paired With Motor Neurons, Dermatomes 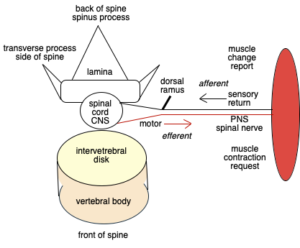 A motor neuron is efferent, with nerve signals heading away from the CNS to the target muscles. This is the means by which your brain relays to your muscles how it wants the body to move. A sensory neuron is afferent, which means it is sending signals back to the spine based on information gathered in the periphery of the body, such as skin touching the thorn of a rose, a change in physical position after movement, a rising temperature, pain, an intuitive reaction. A pairing of motor and sensory neurons exits the CNS to form a mixed spinal nerve in the PNS that is a complete routing of information to and from the spine as it relates to muscle movement. The motor neuron exits the front, or anterior root, of a spine segment and is paired with a sensory neuron that exits the back, or posterior, root of the same spinal segment. The motor neuron moves a muscle group. The sensory pair reports back to the spine to let the body know what has happened so that other movements in the body can respond as needed. It might surprise people to learn that the skin and muscles help to uncover nerve problems. The sensory portion of the spinal nerve relates to dermatomes in the skin, which are often depicted as multicolored segments that can be mapped back to a specific spinal nerve root to assess spinal injury location. The motor neuron of the spinal nerve can also map back to a specific nerve root to assess injury, muscle weakness, or neuropathy along a nerve line.

The dorsal ramus is a small posterior horn of the sensory neuron just outside of the spine in the PNS. It is the nerve supply to the deep back muscles. It also acts as a dispatch system for information reported back through the sensory neuron line for that specific spine segment. One group of deep back muscles, the multifidus, has lots of muscle spindles that stretch in response to detected messages that sense movement through fascia, action and location, and rate of change in muscle length, which are all known as proprioception. The dorsal ramus aggregates joint movement relative to gravity with other proprioception systems such as the inner ear and eyes to orchestrate the deep back muscles into the desired position for each spinal segment to achieve balance in that moment. Increases in muscle workload, such as lifting a cup to drink coffee, can create tremors in a hand when the dorsal ramus is not functioning at full capacity, especially when stress begins to divert resources away from the muscles.

Another job of the dorsal ramus is to communicate directly with the sympathetic nervous system. If all is well, the dorsal ramus can easily switch back and forth from motor to sensory nerve information routing in and out of the spine. Hamstrings contract and the dorsal ramus tells the quadriceps to relax so the bones of the knee joint can move. However, if there is a perceived threat, from either the brain-generated stress hormones or information returning from the peripheral nervous system, fight-or-flight responses might be triggered. Sympathetic ganglia, or synaptic relay stations, reside in a chain down the length of the spine under the transverse process sides of each of the vertebrae. Guess where the dorsal ramus resides? It’s under the transverse process just outside the central nervous system. The dorsal ramus can direct information and resources to motor neurons for muscles in long paired spinal nerves; it can also direct resources to the stress system as if the nerves were train tracks, and the dorsal ramus can switch which nerve track will be used for which train’s call to action.  Autonomic motor neurons linked to organs exit the spine, but they do not have a sensory pairing directly related to it. For example, autonomic motor neurons exiting the upper thoracic vertebrae control the muscles of the heart and lungs. The sympathetic nervous system organ responses to stress correlate directly to the autonomic motor neurons for specific organs at specific spinal segments. Fight-or-flight systems can be inadvertently tripped by impingement of nerves under the transverse process, creating a low grade stress response and anxiety to one or many organ systems depending on the location of the impingement.

The vagus nerve is the biggest player in the parasympathetic nervous system. The vagus nerve calms things down after an incident. It travels from the brain directly to the peripheral nervous system, roughly shadowing the vascular system. It stops at all of the organs, except the adrenal glands, evangelizing the benefits of tranquility. The dorsal ramus does not have a direct connection to the vagus nerve, but it can influence its action or inaction through its signals to the brain. The crazy hair of my first Parkinson’s patient has been laid to rest. I don’t have a complete understanding of the nervous system, but there are some concepts that are developing to help answer the questions starting from 10 years ago. The nervous system is less of a mystery now and more of a pathway to a functional plan to resolve multiple levels of chronic pain and neurological conditions.