He was still in the saddle, but the horse was flipped on her back. The mare had entered the arena with the crowd’s expectation that she’d win a third event that day. But the opponent, a single cow, was spooked by the flash of a man standing up in a bucking chute right next to where the standoff was about to begin. The animal weighing nearly a ton jumped sideways into the horse and the rider. The collision force pinned the cowboy underneath the 3-year-old – just his legs were visible. Only a world champion horseman could get into that much trouble and live to tell the tale. There was a picture taken of the cowboy’s two boots in the air, one on either side of the horse’s four legs in the air; the spooked Hereford cow was also thrown on its back with all four legs in the air. That incredible photo was lost somewhere between then and now, in the extended fog of trying to forget the pain. We learned that a fire in the photographer’s studio ended any hope of bringing the negative back to life, but the history of that injury was time-stamped into the physical body of the cowboy.

The most engaging conversationalists about the function of anatomy are classically trained artists. Knowing the muscles involved in the movement of the hand evolves into an ethereal painting that seems to capture the very essence of the movement of a hand on canvas. Also, the best place to learn about facial expression muscles is from a caricature training site. Subtle brow muscle movements can be exaggerated in a single stroke to draw a comic effect of disdain.

Artists draw the majority of diagrams used in the education of anatomy. The inherent need to complete an image in its most esoteric aesthetic for a poster on the wall will occasionally override the presentation of the deepest function of a muscle. The gluteus maximus is one such example. The large superficial fibers of this muscle are always drawn in a grand scale to cover the majority of the butt, but there is so much more to know about what goes on behind the common imagery of the gluteus maximus – the deep, hidden fibers.

I have visual aphantasia; the absence of visual imagery in the mind’s eye. A psychic said I had a fearful birth. It was true – the placenta dropped to block my natural exit pathway, resulting in an emergency C-section and baby head trauma. I entered the world with no sense of direction, weak facial recognition, and the inability to be a visual learner.

With a blank mind’s eye, I developed superpower sensory perception to compensate. As a massage therapist, I close my eyes, and my mind does not see anything, so I read the subconscious of the client alerting me to an issue, and a location to start. This subconscious listening exercise draws me into a live 3D body-world exhibit, and the history of injury, like the cowboy under the horse, is present with a story in the body.

Pamela was my Advanced Massage teacher that taught my fingers to track the parallel direction of discernible muscle fibers – which I use to differentiate layers of muscle by their action potential. Through my years of practice and research, the data collected about muscle attachment sites and movement patterns was transferred painstakingly to a database. That data is used to fix chronic client problems by attempting to find anomalies that don’t match optimal patterns, and then to restore the body closer to its pre-injury and pre-compensation state. Pound Sand or Palpate Muscles

Origin and insertion are two common terms to describe the connection between muscle tendons and bones. A muscle’s origin is a fixed site and serves as an anchor for an insertion point. At insertion points – where a muscle attachment crosses a joint – movement is possible. Often, anatomy terms are listed in disjoined form for the entire muscle without any logic between connectivity and activity. The brain tells the muscles to move. Through trained proprioception, or sensory awareness, the body knows to use the most logical muscles to create movement at a joint. Sometimes just a segment of a muscle has the most efficient mechanical leverage. Organizing origin and insertion lists into data pairings that follow unique subsets of fiber direction within a muscle can pinpoint distinct muscle segments that are optimally aligned and positioned to perform a specific activity.

Greater than 98% of the visual learner population can imagine the standard gluteus maximus muscle image depicted below. But I “see” things differently – drawing from my anatomy database, this is an image of the sensory experience I feel of the gluteus maximus. 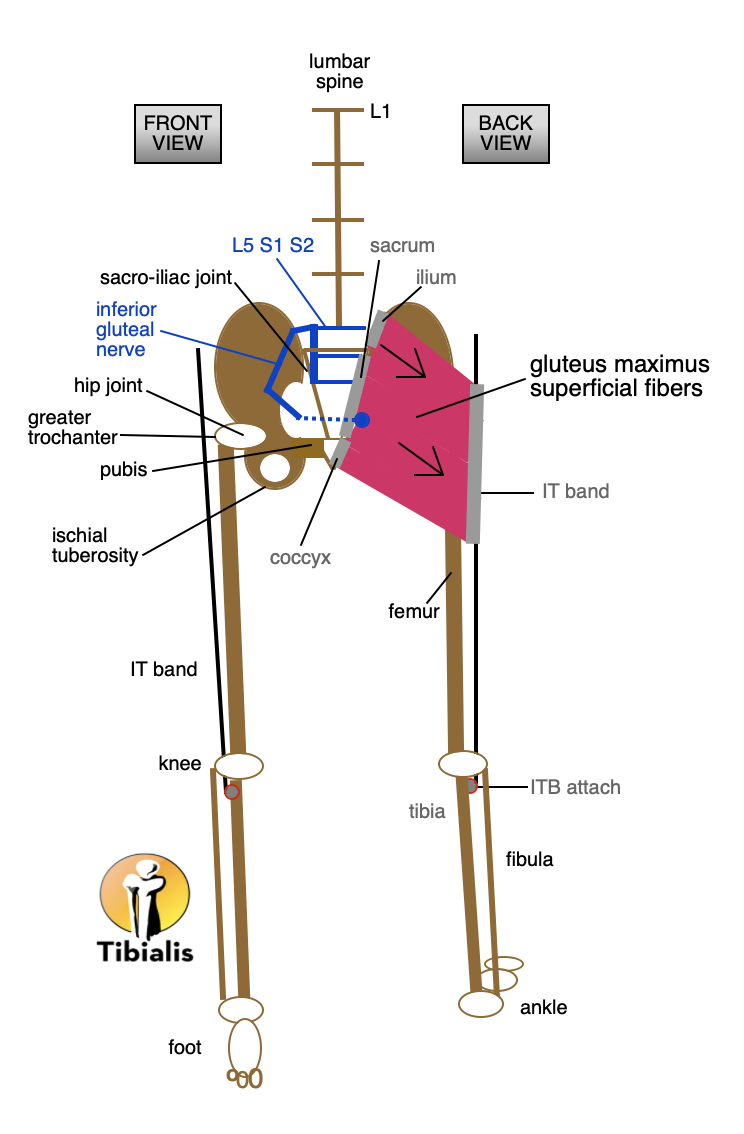 The table below shows the logical pairings of origin and insertion data of muscle segments that perform specific motions.

Following the first line of data, the upper superficial fibers of the gluteus maximus are defined as origin attachment at the ilium bone behind the posterior gluteal line. The insertion of that segment’s fiber direction line is the upper iliotibial or IT band.  The primary action of that muscle segment is to extend the hip joint in order to bring the thigh behind the hip while walking. The lower superficial fibers also participate in this hip joint extension, but the upper fibers are better located for outward hip abduction (movement away from the midline), and the lower fibers have better access to hip adduction (movement toward the midline), which brings the leg inward.

The human adaptation of the gluteus maximus upper superficial segment from the ilium to the IT band allowed both the hip and spine to be upright at the same time. Human standing posture was a tradeoff of leg strength and speed for movement flexibility needed for migration over land and the endurance to run, at slower speeds, to catch food. For those familiar with the squat exercise, bending the knees and bringing the hips backward and closer to the floor, is a position of strength – which uses the deep fibers of the gluteus maximus. 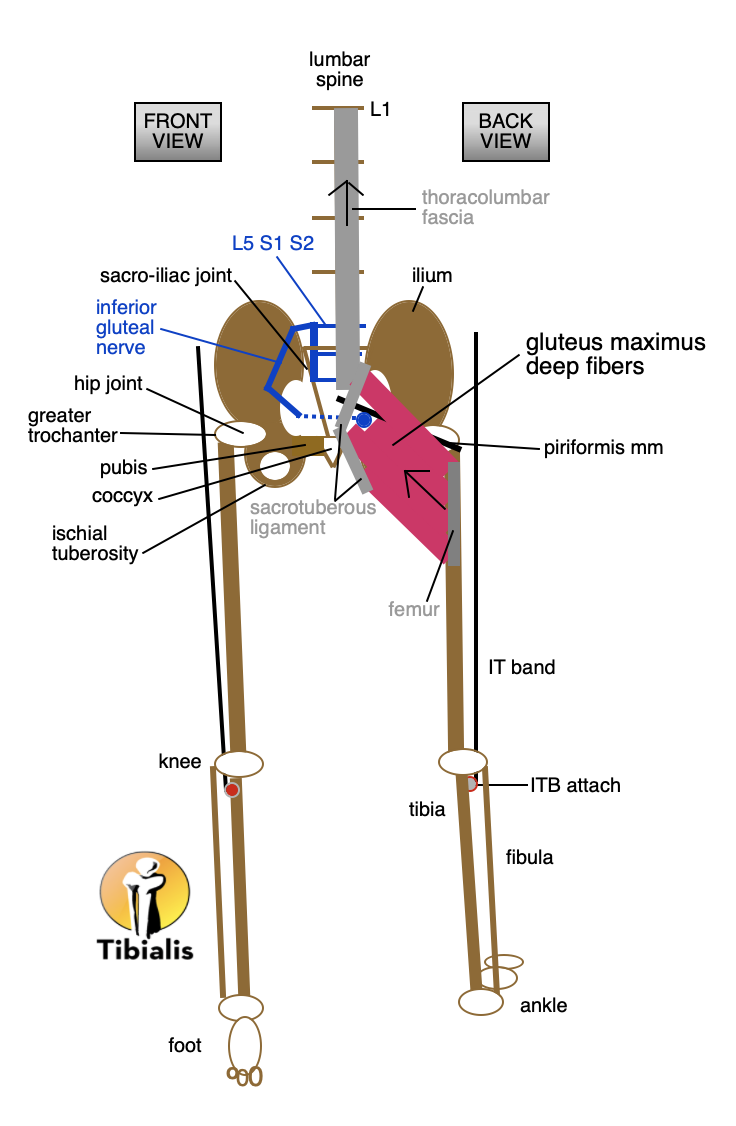 Now look at the deep fibers of the gluteus maximus.

The anchor of movement is the upper femur, and the moving gluteus maximus tendons attach to the sacrotuberous and sacroiliac ligaments. The striation of the deep fibers is the same as the superficial fibers, but movement goes upward to act from the foot to the leg to the thoracolumbar fascia surrounding deep back and core muscles to help stabilize the spin

Opposing downward and upward movement through superficial and deep gluteus maximus segments keeps the body upright, in balanced posture, and offers resistance to falling forward when walking. Falling is one of the big challenges faced by robots trying to emulate human movement patterns. One of the intermediate signs of Parkinson’s disease is falling backwards when trying to stand straight.

If there is an injury in the body, the trained proprioception for optimal movement may be compromised at the injury site, at the location of a secondary or tertiary impact, or through a rerouting of movement to compensate for the injured area. Maybe during a fall off a bike, you scraped your hip on the road, but your elbow also hit the road and protected your head from hitting the ground. If one or all of the muscle’s first string of preferred movement segments is on the injured list, the second string of nearby muscles is recruited to get the job done. Often, the awkward muscle patterns trying to cover for injury break down over time, and the overworked muscles are in pain, hiding the original injury.

After learning which muscle segments perform which motions, it’s easier to track how muscle patterns behave when working and reroute when there are problems. Mapping and grouping muscle segment origin and insertion attachment data points relative to actions can deepen access to information about how the body works, and how to fix it after an accident, injury, or repetitive strain.